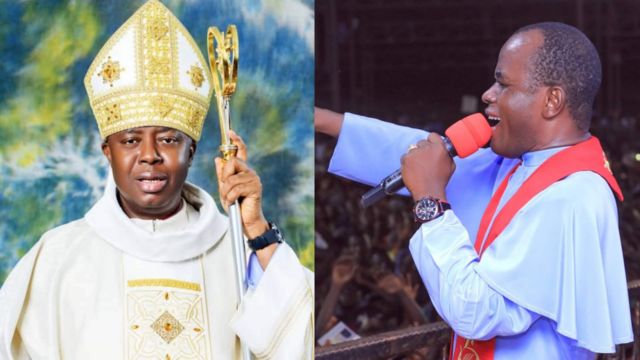 Campaign Pilot reports that this is coming following the recent comments by Mbaka against the Labour Party’s Presidential candidate, Mr. Peter Obi, whom he called a ‘stingy man’.

It was reported that Mbaka breached canon 220 of 1983 Code of Canon Law which prohibits anyone from illegitimately tarnishing the good name of another person.

In a letter signed by Bishop Onaga, which was addressed to ‘All the Clergy, Religious and Lay Faithful in the Catholic Diocese of Enugu’, the diocese banned Catholics from having anything to do with the Adoration Ministry.

The Bishop in the letter said that Mbaka having refused to heed to the Church’s persistent directives, “and in fulfillment of my pastoral duties as the Chief Shepherd”, “I hereby prohibit all Catholics (clergy, religious and lay faithful) henceforth from attending all religious and liturgical activities of the Catholic Adoration Ministry until the due canonical process initiated by the Diocese is concluded.”

He stated that his decision was based on the fact that Mbaka’s teaching and utterances were not consistent with the teachings of the Catholic Church.

Bishop Onaga however enjoined “all Christian faithful to keep praying for Fr. Mbaka.

Earlier it was also reported that Mbaka apologised to Obi and his supporters on Friday after the Enugu Diocese dissociated itself from the cleric’s utterances which it described as divisive and unbecoming of a priest.