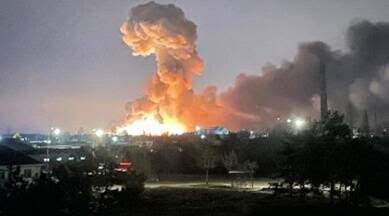 Earlier Wednesday, Ukraine had taken steps to brace for a possible Russian invasion, declaring a nationwide state of emergency and calling up 36,000 military reservists.

However, the U.S. President Joe Biden said a day earlier that the world is witnessing the beginning of a Russian invasion of Ukraine.

President Putin announced he was recognizing the independence of two Russia-backed separatist areas in eastern Ukraine’s Donbas region — the self-proclaimed People’s Republics of Donetsk and Luhansk — which prompted a set of sanctions from Western countries, including Germany halting approval of a major gas pipeline from Russia.

While the United States had said some 190,000 Russian troops and pro-Russian separatist forces were estimated to be massed near Ukraine’s borders in the days leading up to the attack, Russia blamed Ukraine for stoking the crisis and reiterated its demands that Ukraine pledges to never join NATO.

U.S has announced new economic sanctions on Russia, after weeks of escalating tensions in the region.

Meanwhile, Ukraine claimed to have shot down Russian aircraft.