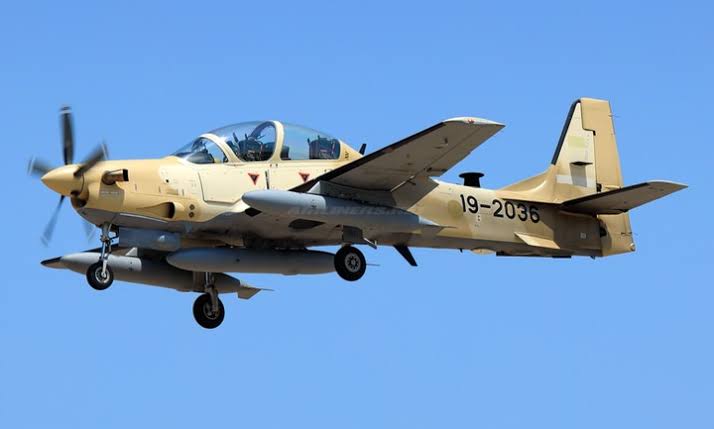 Airstrikes undertaken by a Nigerian Air Force (NAF) aircraft have neutralized Dogo Umaru, a key terrorist-kingpin, loyal to the notorious bandit leader, Bello Turji. The bombardments also killed no fewer than 40 other bandits.

PRNigeria gathered that the airstrikes were authorized by the military command after Dogo Umaru and his cohorts were confirmed to have orchestrated a series of ‘gruesome’ attacks on Magama Village in Jibia Local Government Area (LGA) of Katsina State.

One of their recent attacks led to the death of the Magama Divisional Police Officer (DPO), while a soldier was wounded.

Dogo Umaru and his foot soldiers have been known to stage their attacks on surrounding villages from a nearby school, Tsamben Dantambara Primary School, which has since been deserted.

However, PRNigeria learnt from a military covert operative that two aircraft were deployed to tackle the Katsina terrorist elements.

“One of the aircraft engaged the terrorists in successive passes, while the second one equally mopped-up fleeing Terrorists,” he said.

Local sources residing near Tsamben Babare village revealed that 42 terrorists were eliminated in the NAF airstrikes, including Dogo Umaru.

An intelligence officer of the Nigerian Army said the military troops and men of other security agencies have intensified their operation in various theatres in the Northwest, recently.

“Last week, strikes by a NAF aircraft and combat operations of the ground troops in Kaduna and Niger States eliminated scores of terrorists near the Nigerian Defence Academy and along Shadadi-Maundu respectively”.