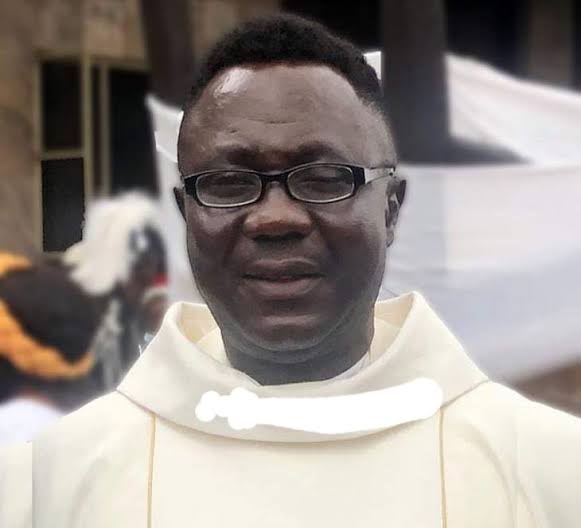 Reactions has continued to trail the decision of a Catholic priest ban on Igbo music from his church as it has led to a debate among Catholics of various tribes on social media.

According to reports, during the second collection, the priest became enraged and abruptly interrupted a soul-lifting song, stating that Igbos could not continue to dominate other people in his Catholic church.

In response to the act, the Catholic church in Lagos has ‘suspended’ the Parish Priest.

Alfred Martin, the Catholic Archbishop of Lagos, in a “disclaimer”, directed Anelu to proceed on “an indefinite leave of absence”.

Nigerian journalist, @Moji Danisa who reacted on Facebook said the priest’s stance and accused Igbos of always trying to “colonise” anywhere they go.

Furthermore, @Laila St. Matthew-Daniel responded on Facebook, on the matter in defense of the suspended priest.

@Laila St. Matthew-Daniel accused the Igbos of wanting to take over wherever they find themselves. In her opinion they are not different from “fanatical Muslims”.

“I have Igbos in my family so I speak in love. I also love the BEAT of the Igbo tune but makes no sense to me if I don’t understand what they are singing or shouting about. The issue I have is the need for the Igbos to be so domineering and wanting to take over a situation. It is in their DNA. Believe that.

“I can’t remember one of the Colonialists, when giving an analysis of the different tribes did say the Igbos are stubborn, opinionated and unwilling to be led. YES – the war was a sad situation BUT HOW did it start? I don’t see any difference really in the Igbos and some faction of fanatical Muslims who go to a place and want to take over the place.

“Latin is the universal LANGUAGE of the Catholic Church – so people should not go there. If they juxtapose English with it – then people would understand. I don’t think it is the language as such but a ‘take over’ attitude and behaviour. When I was coming back on a trip on Turkish Airlines, it was horrible most of the time. The LOUD banter in the Igbo language was grating. The Yorubas also do same but not as much.

I am going to TURN OFF Notifications because I don’t have time for those who don’t think deep before commenting – and are ready to exhibit their DNA. By the way – character DNA can be controlled. It takes a willingness because I have very confident Igbo relatives. Coming to the priest, he should have been more tactful. But I am not privy to his experience before this. Yes Igbos fill the church most times but it is not THEIR church but it belongs to everyone.”

Obiora Anakwe in his reaction said;

I have read some bile commentaries on the above subject matter unfortunately, and I wish to state the following:

The Catholic Church in Nigerian was dominated by mostly Igbo’s and Yoruba’s a few year ago.

Sadly, the advent of the new church ( Pentecostal) took away a large population of the Catholic Yoruba’s leaving the Igbo’s as majority Catholic’s in Nigeria.

Infact, there are unconfirmed report that every family in Mbaise, Imo state has at least one reverend father as a brother.

Therefore, the singing of Igbo songs and hymns in Nigerian Catholic church is a reflection of these statistical realities.

It may interest you to know that in a lot of Catholic Churches in the US particularly churches with Igbo reverend fathers, they sing mostly Igbo hymns and songs even with a few Caucasians in attendance.

As a Catholic myself, I have attended mass in Georgia, Alabama, Massachusetts, Arizona, California and a few other states in the US. This same phenomenon is also prevalent and no one is complaining.

In one instance in Phoenix AZ , the reverend was Indian ; but the hymns and songs were mostly in Igbo language.

Sincerely, I think that the comment by that Rev. in Ikorodu was insensitive and without fact.