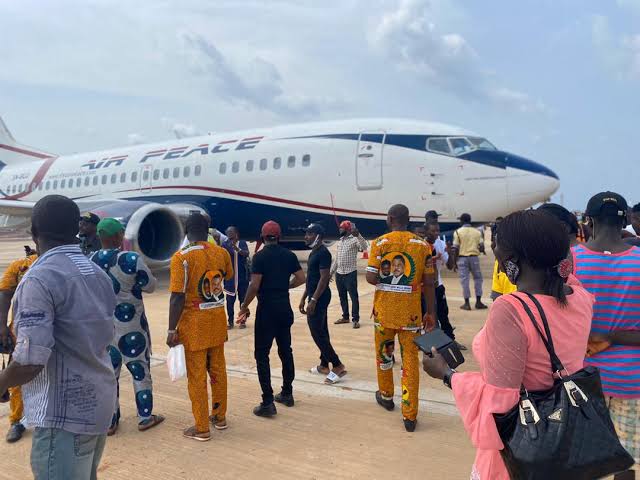 The newly inaugurated Anambra Cargo Airport has recorded 142 flights with 3,865 passengers landing and taking off from the airport after one month of the opening of the facility.

The airport was opened for commercial services on December 7, 2021.

The Anambra Commissioner for Works, Marcel Ifejiofor, disclosed this in an interview with the News Agency of Nigeria (NAN) on Sunday in Umueri, near Awka, where the airport is located.

He said that although the flight and passenger figures surpassed projections when compared with the airport’s contemporaries, it would have been more, if more airlines were using the airport.

NAN reported that so far, only Air Peace and United Nigeria Airlines are landing and taking off at the Anambra Airport.

Mr Ifejiofor, who is also the head of the Anambra State Airport Project Committee, said the airport contributed significantly to easing passenger traffic during the yuletide.

He said that passengers who would have landed at Asaba and Enugu Airports flew straight into the Anambra airport.

“Anambra Airport is a hub, there is no place you can’t go to in Nigeria from Anambra State. We are just scratching the surface in terms of activities that will take place here.”

Also speaking, Martin Nwafor, the managing director of the Anambra Airport Management Authority, said the service quality at the airport has continued to improve.

Mr Nwafor said that all the regulatory agencies in the aviation sector, including the Nigerian Civil Aviation Authority, Nigerian Meteorological Agency, Federal Airports Authority of Nigeria, among others, were now domiciled at the airport.

He said there had not been “any issue” since the opening of the airport and that the airport management was prepared to handle issues as they arose.

Mr Nwafor said workers deployed to the airport were trained and that they had been given sufficient orientation on how to do their job.