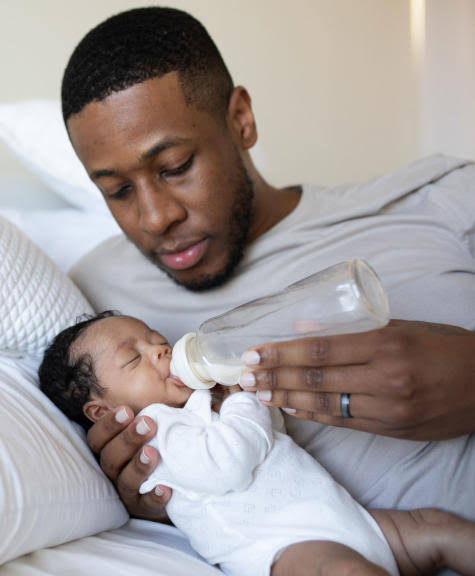 Mixed reactions have continued to trail the 14-day paternity leave approved by the Federal Government on Sept. 29 for fathers of newborn and adopted babies.

While some respondents commended the Federal Government for the gesture, others said that the approval was not necessary.

The approval seeks to allow men to properly bond with their newborn babies or adopted ones.

Mr. John Silas, a civil servant, who appreciated the gesture, said that it would help lactating mothers to be more comfortable.

“It is a welcome development because it will help me to support my wife in taking care of the baby, most especially in making sure that exclusive breastfeeding is fully applied,’’ he said.

Another respondent, Mr. Mohammed Bashir, said that the responsibility of child care after childbirth should not be left to mothers alone.

According to him, the policy is apt because it will encourage men to also play key roles in child upbringing after birth.

“The policy is a right step in the right direction since sometimes children are left alone in the hands of people we they do not even know.

“It should not be the responsibility of women alone to look after the newborn; men should have a stake in the process. The government has done what needs to be done,’’ he said.

Mr Sunday Ukoha, another civil servant said he supported the Federal Government for the approval.

“I am happy with the approval of the paternity leave because it will help me to support my wife, particularly soon after she is delivered of the baby.

“It will help her to have adequate rest,’’ Ukoha said.

Rachel Chigozie, a businesswoman, also thanked the Federal Government for the gesture.

“I fully support the paternity leave; imagine my husband being there for me after delivery; it will be encouraging.

“He will help me out in so many ways like in house chores in the early stage or in running some errands that will be required of him.’’

On the contrary, Mrs. Phina Mefor, a public servant, told NAN that paternity leave was not necessary.

“What will men be doing during the paternity leave? Breastfeeding the baby or bathing the baby’’? she queried.

“I don’t think it is necessary because my mother is always there to fully support me.

“Men can request for casual leave if need be and not an official paternity leave,’’ she said.

Mr. Adabayo Olabisi, another respondent said that paternity leave should be designed to suit both fathers and mothers.

“Paternity leave for fathers is good on the one hand and bad on the other hand; how will a 14-day leave impact on the neo-natal period in the upbringing of the newborn?

“The policy should be tailored for both mothers and fathers to take care of their newborn together at the early stages,’’ Olabisi said.

Mr. Abubakar Kabir, a lecturer, also argued that the men would not be doing anything at home during the leave.

“I disagree with it because the mother and the child need financial support than just for the man to be at home doing nothing.

“It is more meaningful if the man is given some more money to take care of mother and child.

“Besides, the mother of the woman will be around to support the nursing mother,’’ he said. (NAN)