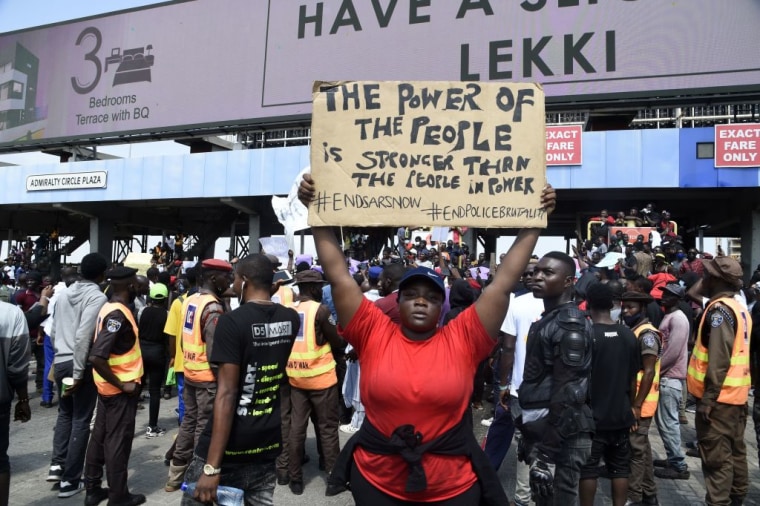 The Lagos State Judicial Panel of Inquiry on Restitution for victims of SARS-related abuses and other matters has concluded that the Nigerian Army shot and killed unarmed protesters at the Lekki Toll Gate on October 20, 2020.

The Panel’s findings were disclosed in its report obtained by Channels Television on Monday.

According to the Panel, the Nigerian Army “was invited for intervention in the State and was deployed to Lekki Toll Gate on the 20th of October 2020.

At the Lekki Toll Gate, officers of the Nigerian Army shot, injured and killed unarmed helpless and defenseless protesters, without provocation or justification, while they were waving the Nigerian Flag and singing the National Anthem and the manner of assault and killing could in contextbe described as a massacre.

“The Panel also found that the conduct of the Nigerian Army was exacerbated by its refusal to allow ambulances render medical assistance to victims who required such assistance.

“The Army was also found not to have adhered to its own Rules of Engagement.”

The Panel also “found that the Nigerian Police Force deployed its officers to the Lekki Toll Gate on the night of the 20th October, 2020 and between that night and the morning of the 21st of October, 2020, its officer shot at, assaulted and battered unarmed protesters, which led to injuries and deaths.

“The police officers also tried to cover up their actions by picking up bullets.”

Also, the Lekki Concession Company (LCC), operators of the toll gate, was found to have “hampered the panel’s investigation by refusing to turn over some useful and vital information/evidence as requested by the Panel and the Forensic Expert engaged by the panel, even where such information and evidence was by the company’s admission, available.

“It manipulated the incomplete CCTV Video footage of the Lekki Toll Gate on the night of the 20th of October 2020, which it tendered before the Panel.”

“The Panel found that there was an attempt to cover up the Incident of the 20th of October by the cleaning of the Lekki Toll Gate and the failure to preserve the scene ahead of potential investigations.”

The Federal Government had denied that unarmed protesters were killed at the toll gate on October 20.

The Minister of Information, Mr. Lai Mohammed, described the incident as a “massacre without bodies.”