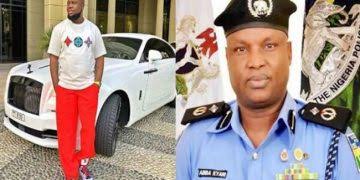 The Inspector-General of Police, Usman Baba, has ordered an internal review of the allegations against a Deputy Commissioner of Police, Abba Kyari, by a United States Court.

This was disclosed by Force spokesman, Frank Mba in a statement on Thursday.

According to a communique from the court, the arrest was made after Vincent threatened to expose a $1m fraud committed against a Qatari businessman.

Mr Mba reaffirms the commitment of the Nigeria Police Force in the pursuit of justice and the strengthening of its professional relationship with the FBI and other international partners.

On the contrary, Mr Kyari has debunked the allegation of the multimillion dollar fraud in his official Facebook page on Thursday.

In his statement, he said, “Abbas who we later came to know as Hushpuppi called our office about 2years ago that somebody in Nigeria Seriously threatened to kill his Family here in Nigeria and he sent the person’s Phone number and pleaded we take action before the Person attacks his family.

“We traced and arrested the Suspect and after investigations we discovered there wasn’t an actual threat to anyone’s life And they are long time friends who have money issues between them hence we released the Suspect on bail to go and he was not taken to any jail.”