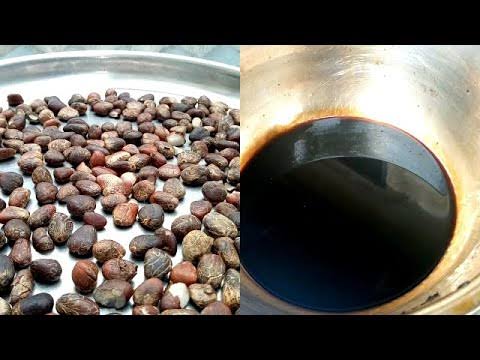 The black in colour Palm kernel nut oil is obtained from palm kernel seeds and very popular in South Eastern and Niger Delta part of Nigeria.

Residents in an interviews in Abuja communities confirmed the efficacy of this acclaimed wonderful oil.

Mrs Patience Udo, a residence of Kabusa community in Abuja, and also produces the oil said it has been a great alternative medicine for treatment of the ailment in children.

She said, “It is a natural cure for convulsion, high fever, cough and can be used for spiritual purposes against evil spirits when applied in body or in the house.”

Mrs Hauwa Patrick, a residence of Apo community in Federal Capital Territory(FCT) narrated how her son’s life was saved by the palm kernel nut oil.

In her words, she said, “My son started convulsing at midnight, I was so scared because I have never seen such before.

“I called out my neighbour for help, who brought the palm kernel nut oil and administered it to my son.
“She held his mouth open and put two table spoon of the oil into his mouth.

“And then rubbed it all over his body, even allowed a bid of it to enter his eyes.

“After awhile I noticed a poop from my son and the convulsion stopped.”

In another interaction, Mrs Sarah Olasami from Ekiti state disclosed a surprising story about the oil.

“Palm kernel nut oil is a very powerful natural oil. I have been using it since i was a child.

“It cures fever in children especially in rainy season, cough, convulsion and rheumatism in adults.”

She further disclosed how the oil healed her from scorpion bite when she was small.

“As a child then, I was bitten by a scorpion and my parents gave me a palm kernel nut oil that was mixed with a dried scorpion, grinded to a powered form.

“Suddenly the pain seized, and I was normal. Even till now I have never had a scorpion bite because it works as an antidote to scorpion bite,” Olasami added.

To further confirm the claims of the health benefits of this palm kernel nut oil in an interview with a pharmacist, Matthew Omale in Gwarinpa.

Mr Omale said some professors; Prof C S Alaribe and other professors conducted a research with the palm kernel they got from a market in Aba, Abia state.

“1,500 grammes of palm kernels of the rare breed was collected by the professors.

“It was cracked open and the nuts poured into steel vessels and heated until oil was produced after charring the nuts.

“The used a group of ten rats which was divided into two sets to conduct the experiment.

“Yeast was induced to one set to make them come down with fever.

“And another set was induced with strychnine sulphate, bitter crystals or white crystalline powder to make them have seizure.

He further said that palm kernel nut oil was administered to both sets of rats.

“After the palm kernel nut oil was given to them, the result showed that ones with fever exhibited good level of anti-pyretic activities by direct reduction of the fever.

“And those rats induced with chemicals to cause seizure in them became normal.

“In conclusion, they said that palm kernel nut oil has the anti-pyretic ability effect which is the ability to reduce fever.

“Either stop seizure or prolong the time at which someone should have come down with seizure.

“Palm kernel nut oil is natural and can be recommended for use to stop seizure in children,” Omale added.

Mrs Veronica Emmanuel from Akwa Ibom narrated her knowledge about the oil.

She stated that the oil is very spiritual as it will only be potent and effective if prepared by elderly woman that has stopped menstruating.

Another resident of Kabusa community, Mrs Charity Clement, said that in her former church that it was used for deliverances as it has against evil spirits.

However, the wonders of this palm kernel nut oil cannot be overemphasised.