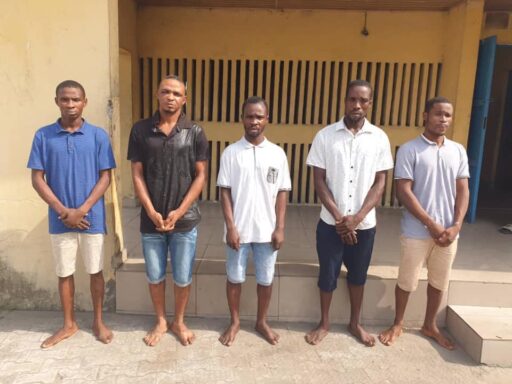 Operatives of Intelligence Response Team of the Nigerian Police have arrested Five suspects following massive manhunt for the perpetrators of the recent trend of abduction of women in some States in the South-South part of the country, especially Port Harcourt and its environs.

According the Force Spokesman, Frank Mba in a statement on Sunday, the victims are subjected to series of sexual abuses and ransom demanded from their families before their release.

“Investigations reveal that the suspects target lone female drivers of Porsche cars as they drive out of offices, shopping malls or any vulnerable places.

“They thereafter, trail them to lonely roads, abduct and take them to their criminal hideouts, sexually abuse them and demand ransom from their families before their release.

“They also sell off their exotic cars. Four (4) AK47 rifles, one (1) double barrel shotgun and set of military camouflage uniforms suspected to have been illegally acquired, which they wear to beat security checks, were recovered. Effort is being intensified to arrest other fleeing gang members and recover more weapons and stolen vehicles used by the suspects for their operations”.

Mr. Mba hinted that the suspects will be arraigned in court on completion of investigations.