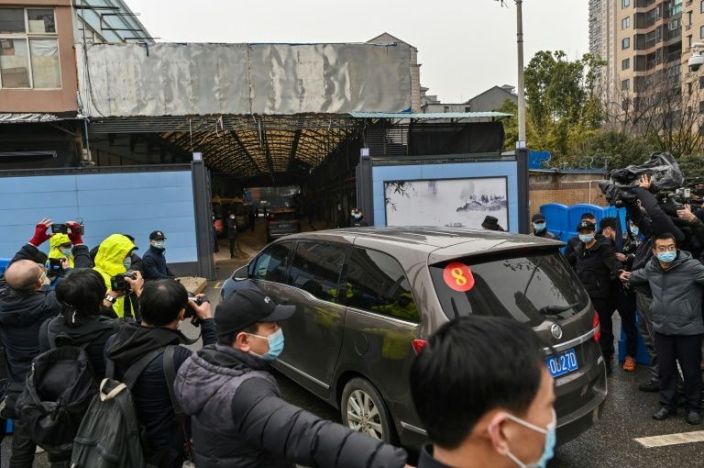 A team of WHO experts investigating the origins of Covid-19 visited a market in Wuhan on Sunday where one of the first reported clusters of infections emerged over a year ago.

Members of the group arrived at Huanan seafood market — which has been sealed since January last year — driving into its barricaded premises as guards quickly blocked others from entering, according to AFP journalists at the scene.

The mission, delayed by China and weighed down by political baggage, has a remit to explore how the virus jumped from animal to human.

But with the fieldwork element of a trip in its early stages, World Health Organization officials have already downplayed expectations of finding the source of a virus which has killed more than two million people and devastated the global economy.

On Sunday, the WHO team arrived at the Huanan market as part of a long-planned trip now closely monitored by the Chinese authorities.

The experts did not take any questions and the sprawling market remains boarded up.

Security staff told reporters outside to leave and shook a tall ladder on which a photographer was sitting for a better view.

Earlier this week, state media outlet Global Times published a report downplaying the importance of Huanan as an early epicenter of the virus, claiming “subsequent investigations” have suggested the market was not the source of the outbreak.

Chinese authorities have relentlessly pushed a positive narrative of heroism and decisive, swift action in their fight against the coronavirus that has spurred an economic recovery and kept deaths down to 4,636.