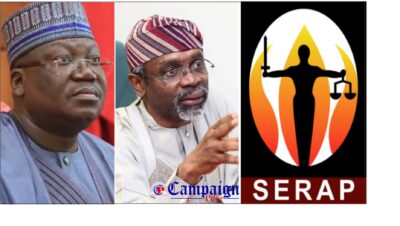 The Socio-Economic Rights and Accountability Project (SERAP) have urged the senate President, Ahmed Lawan and the Speaker, Femi Gbajabiamila to urgently probe and refer to appropriate anti-corruption agencies allegations that N4.4bn of public money budgeted for National Assembly is missing, misappropriated, diverted or stolen, as documented in 3 reports by the auditor-general.

This was contained in a letter dated 30 January 2021 and signed by SERAP deputy Director, Kolawale Oluwadare, read in part: “By exercising strong and effective leadership in this matter, National Assembly can show Nigerians that the legislative body is a proper & accountable watchdog that represents & protects the public interest & can hold itself and FG to account.

“If not satisfactorily addressed, these allegations would undermine public confidence in the ability of the National Assembly to exercise its constitutional and oversight responsibilities to ensure transparency and accountability in the management of public resources.

SERAP further claimed that House of Representatives reportedly spent N624,377,503.30 to buy 48 Utility Vehicles. However, 14 vehicles were not supplied.

The House failed to make the 34 vehicles supplied available for verification and also failed to retire N499,666,666.00 spent as cash advances to staff.