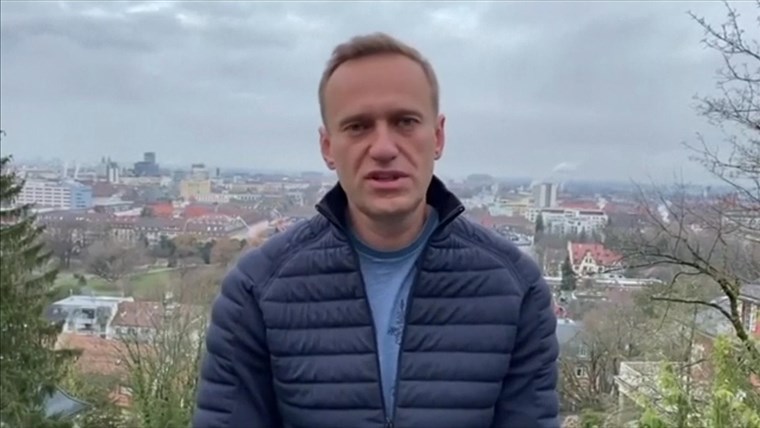 Russian opposition leader Alexey Navalny was detained by police at a Moscow airport shortly after returning to Russia for the first time since he was poisoned with a nerve agent this summer.

Navalny had pledged to return to Russia despite the assassination attempt and recent threats from Russian authorities that he would be jailed, saying he refused to be driven into exile. On Sunday, he flew to Moscow on a commercial flight from Germany, where he had been recuperating from the poisoning.

The flight was diverted at the last minute to Moscow’s Sheremetyevo International Airport after authorities suddenly closed another airport where the plane had been scheduled to land and where hundreds of supporters and journalists were waiting for Navalny.

After he disembarked, Russian police approached Navalny while he was standing at passport control and detained him, which was filmed live by a crowd of journalists that had flown with him from Berlin. Navalny kissed his wife, Yulia, goodbye and was led away.

Navalny’s spokesperson, Kira Yarmysh, who flew with him, said police refused to say where they were taking him or to allow his lawyer to accompany him.

Navalny’s arrest Sunday triggered immediate condemnation among western countries, with the president of the European Union calling it unacceptable, and some European countries calling for a response. Estonia, Lithuania and Latvia issued a joint statement demanding Russia immediately release Navalny and said the EU must consider sanctions if he is not.

Jake Sullivan, who will be Biden’s national security adviser, wrote on Twitter: “Mr. Navalny should be immediately released, and the perpetrators of the outrageous attack on his life must be held accountable. The Kremlin’s attacks on Mr. Navalny are not just a violation of human rights, but an affront to the Russian people who want their voices heard.”

Navalny had spent months recovering in Germany, where he was flown for treatment after falling critically ill in August while aboard a flight in Siberia. A German military lab later found he had been poisoned with a Novichok nerve agent, a type of chemical weapon developed by the Soviet Union.

Days before his arrival, Russia’s prison service announced Navalny had been placed on a wanted list for allegedly violating the terms of a suspended sentence he received for a 2014 fraud conviction. The prison service recently requested that the suspended three and a half-year sentence be converted to real jail time. The 2014 trial where Navalny received the sentence was later ruled as politically motivated by the European Court of Human Rights.

The federal penitentiary service on Sunday said it had detained Navalny at the airport in relation to that warrant and that he would now be held until a court hearing, which is scheduled for Jan. 29.

Read Also:  I Feel Much Better Now, But Next Few Days Will Be The Real Test - Says President Trump

Navalny is Russia’s best-known opposition leader and has built up a large grassroots following with his anti-corruption investigations into powerful figures around President Vladimir Putin.

Navalny had said the threats to arrest him were an attempt by the Kremlin to force him into exile after the attempt to kill him with the nerve agent failed.

After landing, Navalny told the journalists traveling with him that he was “completely happy” to be back and that he had no choice but to return.

“They ask me, am I afraid? I’m not afraid. I, with an absolutely normal feeling, will go up to passport control, go out and go home, because I know that I am right. I know that all the criminal cases against me are fabricated,” he said. Minutes later he was arrested.

Before flying, Navalny had called on his supporters to meet him at the airport, and authorities took elaborate steps to head off images of a triumphant homecoming. A heavy police presence was deployed at Vnukovo International Airport, where Navalny’s flight had initially been due to arrive, with lines of riot trucks parked outside. The airport abruptly introduced new rules restricting building entry to only those with a ticket.

Several hundred people tried to gather at the airport. Inside, police officers in riot gear with helmets and batons shoved supporters and journalists out onto the street, and at least 37 people were arrested.

The flight was abruptly diverted as it approached Vnukovo, leaving journalists and the supporters in the wrong place. Pobeda Airlines said the airport was closed due to sudden “technical reasons” and that two of its other flights had been forced to divert. After the diversion, police for a time blocked the road out of Vnukovo as journalists tried to reach the other airport.

Navalny’s wife, Yulia, said the decision to divert the plane showed how afraid the Kremlin is of her husband. “The main thing is what Alexey said, that he is not afraid. And I call on you not to be afraid,” she told reporters.

Russia has denied any involvement in Navalny’s poisoning. But an investigation by the independent investigative journalism website Bellingcat last month published evidence that a team of alleged agents from Russia’s FSB intelligence agency had trailed Navalny for years and were present in the Siberian city of Tomsk when he was poisoned. Navalny also recorded one of the alleged agents unwittingly admitting to the plot to Navalny himself in a phone call where he posed as a senior Russian official.

Last month Putin confirmed that the FSB was following Navalny but denied they had poisoned him, saying if they had, “they would have finished the job.”