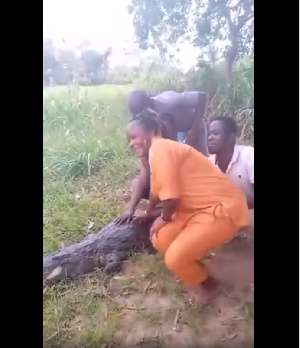 Crocodile has attacked a tourist in a pond which is fast growing into one of the most popular tourist centers in Ave Dakpa in the Volta Region of Ghana.

According to report, a female tourist who was part of a group that visited the place on December 2020, was attacked by a crocodile in an attempt to take close-up pictures with the reptile.

In a video from the incident sited by GhanaWeb, the group of tourists are seen crowding around the crocodile to take pictures with some bending over the reptile who was lying calmly throughout.

However, a woman who was part of the entourage in her bid to join the photo op incurred a swift bite from the crocodile by stroking its side.

The resulting panic from the attack left the tourists and the tour guards running for their lives. The woman was said to have been rushed to a nearby hospital for treatment. Though the extent of the injury suffered by the tourist is yet to be ascertained.

Watch video of the incident below