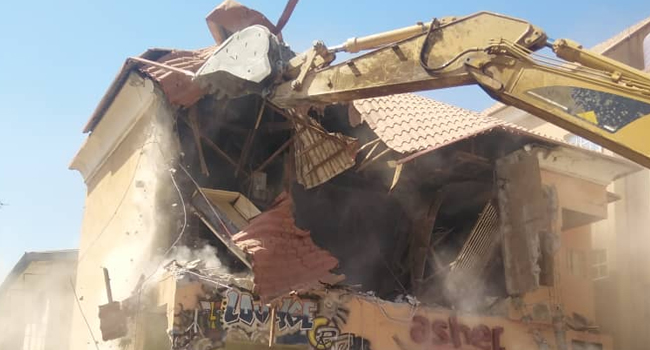 The Kaduna State Government has demolished a hotel billed to host the “Kaduna Sex Party,” citing a violation of COVID-19 protocols.

According to the Kaduna State Urban Planning and Development Authority(KASUPDA), Asher Hotel was the proposed venue for the Kaduna Sex Party, the hotel was also caught contravening the Covid-19 guidelines of the state.

He noted that the demolition exercise is in accordance with the laws guiding the agency over properties in the state and also vested in the agency the power to demolish any building that contravenes the rights of occupancy.

“The law has vested the agency the power to demolish any building that contravenes the rights of occupancy, for instance, if a residential building is turned into something other that the purpose it was meant for, the law gives us power to demolish such property especially if it’s against public interest.”

Garba also said, “We were in Narayi, another suburb in the state to carry out similar assignment. We are currently demolishing another building that promotes illicit acts.”

The aborted sex party, which received high criticisms on the social media was slated for December 27, 2020, at an undisclosed venue in the Kaduna capital.

Meanwhile, one of suspect who was paraded by police in Kaduna on Thursday said, the said Sex Party was not organised to cause nuisance in Kaduna State, as it was not supposed to go public, but a mere party among friends.