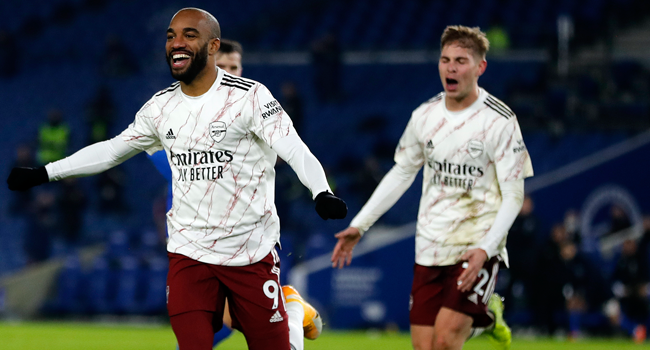 Alexandre Lacazette’s 21 seconds strike after coming off the bench to give Arsenal a hard-fought 1-0 win over Brighton.

An assist from Bukayo Saka’s cut-back with his first touch after replacing Gabriel Martinelli in the 66th minute at the Amex Stadium before composing himself and firing a clinical finish into the bottom corner.

This became a second consecutive victory for Arsenal following their 3-1 win over Chelsea on Boxing Day, giving them back-to-back Premier League wins for the first time since their opening two games of the season.

But they were made to work for it by Brighton, who dominated the first half and would have gone into the break in front had it not been for the wasteful finishing of Alireza Jahanbakhsh and Alexis Mac Allister.

Arsenal looked transformed in the second half, however, going close to scoring on numerous occasions before Lacazette broke the deadlock, his goal moving the Gunners from 15th to 13th in the table and pushing Brighton closer to the relegation zone.