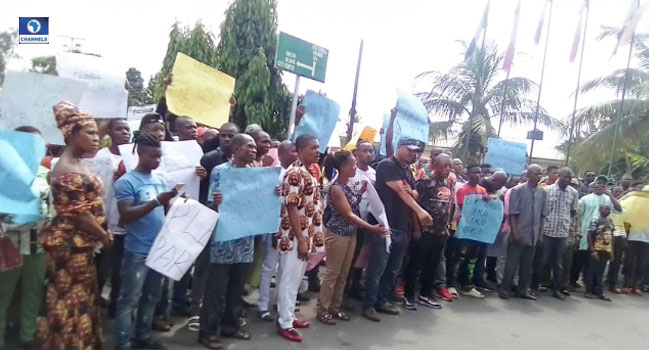 Some youths in Abia state have taken to the streets of Umuahia, to demand for the recall of suspended Chief Of Staff, Anthony Agbazuere.

Governor Okezie Ikpeazu had on December 6 ordered the immediate suspension of Agbazuere following a viral video that captured him spraying naira notes on a controversial Nigerian prophet, Odumeje, inside the Government House.

According to Channels Television, the leader of the group, Donatus Obiukwu, explained Governor Ikpeazu is a kind-hearted man, adding that he should indeed ignore calls from those who are enemies of progress and recall the Chief of Staff.

“We know the Chief of Staff gulf by his actions. But we beg you, Governor Ikpeazu, our loving father, please forgive Agbazuere for his offence,” Obiukwu said.

“We are begging you to recall him back because we can guaranty you that such a thing will never happen again, please, our Governor, recall the suspension and give him back his job.”

Addressing the protesters, the Secretary to the State Government, Barrister Chris Ezem called on the youths to calm down as their message will get to the Governor.

The SSG reminded them of the protocols involved, stressing that the governor has the prerogative to sack or suspend depending on the magnitude of offence.

“You all know that the governor is in charge, but I will pass the message across to him, but I want you all to be calm and peaceful in your conduct, lets allow the governor to decide the next line of action,” he said.