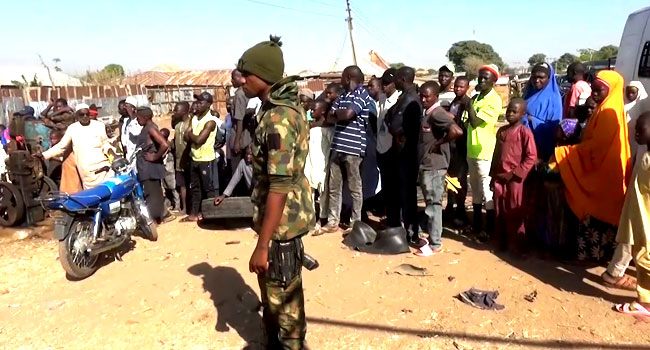 During the incident which occurred on Friday night, the assailants shot the leader of Fulani Ardos in the state.

The armed men were said to have invaded the community in their large numbers and went straight to the residence of the Fulani leader, Ardo Ahmadu Suleiman.

They shot at Suleiman shortly after he observed the 8pm Ishai Muslim prayer at a mosque close to his house, but he survived the attack.

Tsoho Garba, an In-law of the victim and the Chief Imam of Kasuwan Magani Mosque, narrated how the incident occurred to the Commissioner for Internal Security and Home Affairs in Kaduna, Samuel Aruwan, who visited the scene on Saturday.

He told Aruwan who was on the visit in company with the Garrison Commander of One Mechanised Division of the Nigerian Army, Brigadier General Olusegun Abai, that the bandits trailed the Fulani leader from the mosque down to his house which was about 20 metres away.

According to Garba, the gunmen also shot sporadically in the community, creating panic among residents who scampered for safety before the arrival of security operatives who later brought the situation under control.

In his remarks, the commissioner described the attack on the Fulani leader as a case of an assassination attempt by bandits for working with the government towards eliminating banditry and kidnapping in Kajuru LGA.

Brigadier General Abai, on his part, revealed that the security agencies held a meeting with stakeholders in Kasuwan Magani on how to strengthen security in the town and other surrounding communities in Kajuru.