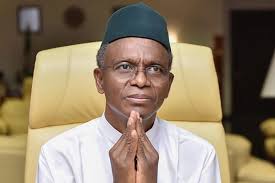 Kaduna State Governor, Nasir El-Rufai, is unhappy with the security challenges in the country and dissatisfied with the roles of the state governors, as provided for in the Nigerian Constitution.

Governor El-Rufai while responding to an interview with Channels Television programme, Politics Today from Dubai, suggested the way to go to ensure the nation surmounts its various security challenges such as insurgency, banditry, and kidnapping among others.

He stressed that the recent #EndSARS protest by youths against police brutality in parts of the country has exposed the inability of the governors despite being called the Chief Security Officers of their states.

“We are all frustrated. I am frustrated in my state, many governors are frustrated in their states; we are called chief security officers only in name, we have no control over cohesive instruments of the state,” the governor said.

He added, “We are almost helpless. The #EndSARS protest clearly showed the limit to the control of governors over the police and the military.

“Some of us have more influence than others, but to a large extent, you ask the commissioner of police to do something and he has to clear with the Inspector-General of Police; this is the reality.

“We are not in control of the police, I don’t determine who gets posted to my state as CP and if I give him directives, he can decide to flout the directives. So, we are all frustrated.”