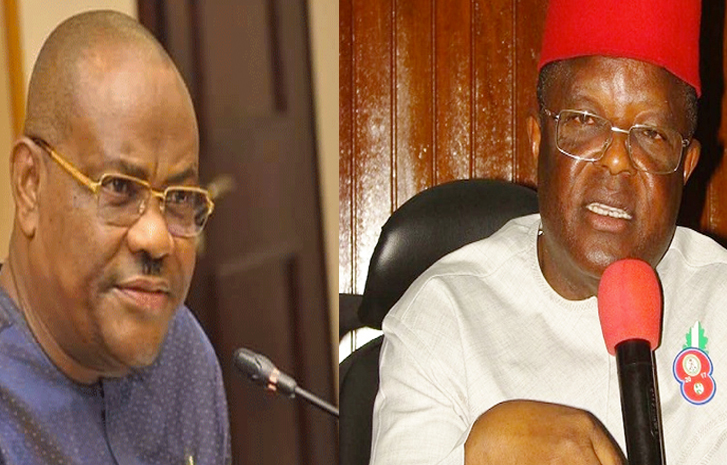 Governor Nyesom Wike of Rivers state has slammed his Ebonyi State counterpart, Governor David Umahi, over his reasons for defecting to the All Progressives Congress (APC) is because of injustice meted on the South East by the Peoples Democratic Party (PDP).

According to him, Governor Umahi left the PDP because he wants to be the presidential candidate of the All Progressives Congress (APC) in 2023 and not injustice meted on the South East by the opposition party, as claimed.

He stated that committed members of the PDP were not surprised that the Ebonyi governor formally defected to the APC on Tuesday, which he had been fraternizing with for a while.

Wike decried that he felt offended by Governor’s Umahi’s attempt to justify his decision on the purported injustice meted on the South East by the PDP.

The Rivers governor accused his Ebonyi counterpart of being unfair to the opposition party which gave him its governorship ticket in 2015 against all odds and repeated the same feat in 2019.

He noted that while Governor Umahi has a right to move to the APC, for him to attempt to blackmail the PDP and paint it in a bad light was mischievous and unacceptable.

“But, that does not mean, that because you want to blackmail your party, and tell lies to the people you are leaving the party because of the injustice meted against the South-East, that is not correct,” Governor Wike said.

However, He asked Umahi to retract the statement that the PDP has not been fair to the South-East, stressing that under the PDP, the South East has produced Senate Presidents, national vice party chairman, and Secretary to the Government of the Federation (SGF).

Read Also:  Deal with bandits in a language they understands - Buhari urges Military

The Rivers governor stated that it was erroneous for Governor Umahi to accuse the PDP of injustice, when he had unilaterally ‘imposed’ his younger brother as South-East Zonal Vice Chairman of the PDP.

He said, “In life, power is sweet, but conscience is important. It is most offensive and insulting for a man to lie against his party because of power.”

The governor believes although APC has not revealed where it will zone its presidential ticket, Governor Umahi’s move may be too hasty and ruin him politically.

Governor Wike, therefore, urged the National Working Committee and the National Executive Committee of the PDP to take decisive steps to ensure the PDP does not die in Ebonyi State.

Umahi’s defection comes after days of speculation culminating in APC south-east caucus meeting in Abuja on Monday night into early hours of Tuesday.