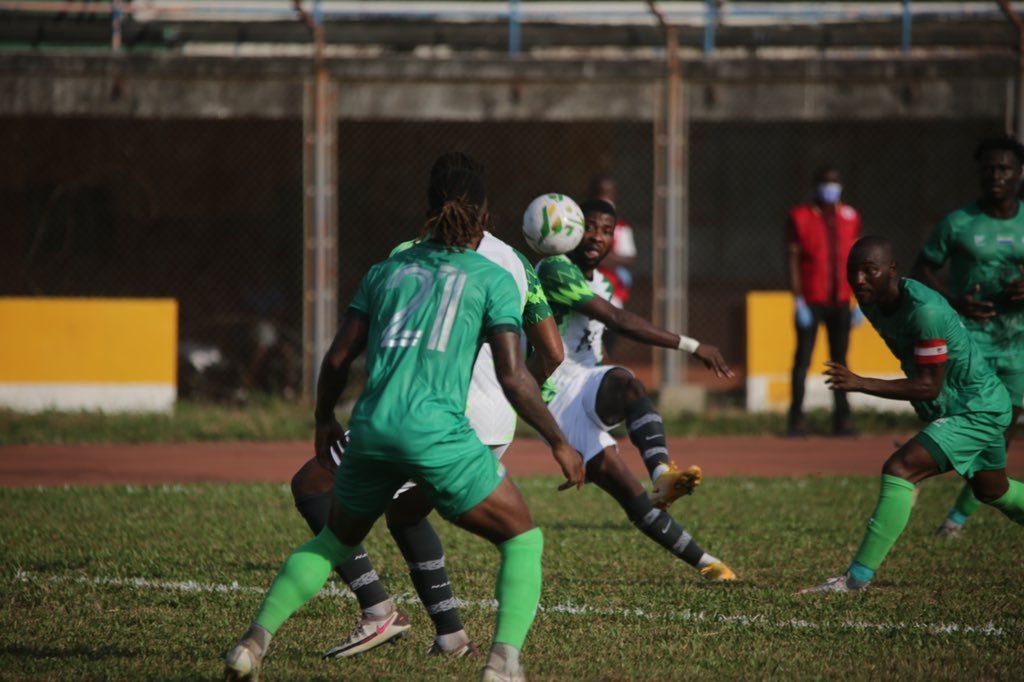 Nigeria were held to a goalless draw by Sierra Leone in Tuesday’s Africa Cup of Nations qualifying fixture in Freetown.

The result at the National Stadium means the Super Eagles would have to wait to confirm their place at Cameroon 2022, though they remain at the summit of Group L with eight points after four matches.

Following Friday’s 4-4 draw in Benin, coach Gernot Rohr made two changes to the starting XI as Leicester City’s Kelechi Iheanacho led the attack, in the absence of injured Victor Osimhen while Fulham’s Ola Aina got the nod ahead of Zaidu Sanusi.

The Super Eagles started the encounter on a promising note with Iheanacho registering the first shot on target in the third minute but his free-kick failed to beat goalkeeper Mohamed Kamara.

A few minutes before the half-hour mark, Sierra Leone had their first real chance but Mohamed Buya Turay’s strike from outside the penalty area was comfortably saved by Maduka Okoye.

John Keister’s men continued to push for the opener but Okoye was ready to produce some fine saves to keep both teams level in the first 45 minutes.

Nigeria were forced to make an early substitution towards the end of the first-half as Oghenekaro Etebo was replaced by Abdullahi Shehu because of an injury.

Six minutes after the restart, Iheanacho had another chance to fire Rohr’s side ahead but his effort did not find the target.

The Leicester City forward got the ball into the back of the net in the 61st minute after a cross from Alex Iwobi but it did not count because the Everton midfielder was in an offside position.

Nigeria captain Ahmed Musa was shown the only yellow card of the encounter in the 71st minute while Akpoguma came off for Chidozie Awaziem shortly thereafter.

It was an eventful last 10 minutes for the Super Eagles as Iheanacho had a shot parried away by the Leone Stars shot-stopper after some fine teamwork.

After his fine solo effort, he was immediately replaced by Club Brugge’s Emmanuel Dennis while West Bromwich Albion defender Semi Ajayi was introduced for Joe Aribo.

Nigeria are a point ahead of second-placed Benin, who have gathered seven points after four matches.

The two teams will battle in Benin for their next group fixture on March 22 before the Super Eagles host Lesotho for their last match eight days later.