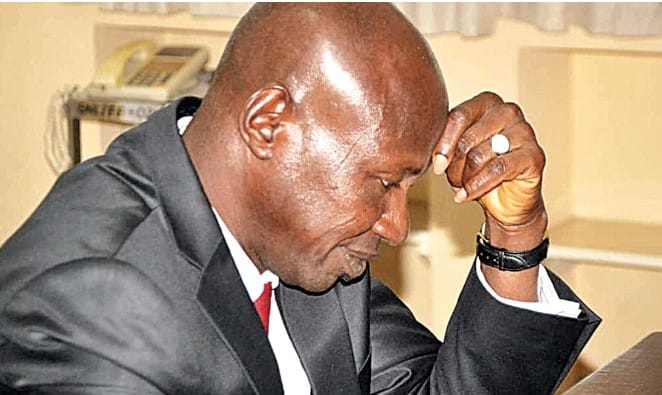 The Code of Conduct Bureau (CCB) has summoned the embattled suspended acting Chairman of the Economic and Financial Crimes Commission (EFCC), Ibrahim Magu.

In a letter dated November 2 and signed by CCB’s Director of Intelligence, Investigation and Monitoring, the bureau directed Magu to produce acknowledgement slips of all the asset declarations he made since he joined public service with all documents of certified true copies.

Magu is expected to appear before the bureau on November 17 with documents of all his landed properties.

The other documents the suspended EFCC boss was ordered to make available to the bureau, including copies of his appointment letter, acceptance, records of service and pay slips from January to May 2020, and documents pertaining to both his developed and undeveloped landed properties.

This comes about four months after Magu was removed from office over the probe of the activities of the anti-graft agency under his watch.

President Muhammadu Buhari on June 11, suspended Mr Magu and appointed Mohammed Umar, the director of operations at the commission as the new acting chairman, said there is no sacred cow in the fight against corruption in this administration.

Magu’s suspension was based on allegations levelled against him by a panel set up by the Attorney-General of the Federation, Abubakar Malami.

He was accused of buying a home in Dubai worth over N570m and being unable to account for the interest accrued to over N500bn recovered by the EFCC but he denied the allegations.