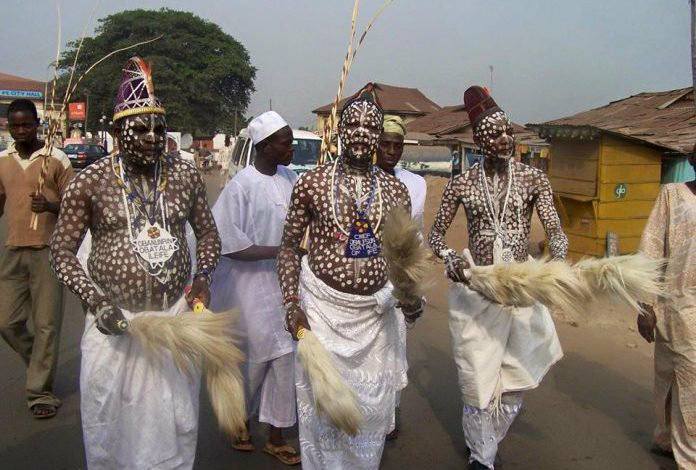 The word Oro means fierceness, tempest, or provocation, and Oro himself appears to be personified executive power. Oro is supposed to haunt the forest in the neighbourhood of towns, and he makes his approach known by a strange, whirring, roaring noise.

As soon as this is heard, all women must shut themselves up in their houses, and refrain from looking out on pain of death.The voice of Oro is produced by whirling round and round a thin strip of wood, some 21/2 inches broad, 12 inches long, and tapering at both ends, which is fastened to a stick by a long string.

It is, in fact, the instrument known to English boys as the “bull-roarer,” and which Mr. Andrew Lang has shown to have been used in the mysteries of Ancient Greece, Australia, New Mexico, New Zealand, and South Africa. No women may see the “bullroarer” and live, and all women are obliged, under pain of death, to say that they believe Oro to be a powerful Orisha, and to act up to that belief.

Read Also:  The gods are not to blame BY OLA ROTIMI (Summary)

In Yoruba country Oro is manipulated by the Ogboni Society. Criminals condemned to death are sometimes given to Oro, in which case they are ordinarily never seen again, but their clothes are shown entangled in the branches of a lofty tree, where Oro is said to have left them when flying through the air. In such a case Oro is said to have devoured the bodies.

Sometimes, however, the headless corpse of the criminal is discovered in the forest on the outskirts of the town, but nobody is allowed to bury it. Unlike Egungun, Oro only appears on his feast-days, or, to use the native expression, when a town has an Oro-day. The voice of Oro heard from morning to night, -and all women are closely confined to their houses, while Oro himself, in a long robe hung with shells, and a wooden mask painted white, with the lips smeared with blood, parades the town with a numerous following.

In Ondo there is an annual festival to Oro, called Oro Doko. It lasts for three lunar months, and every ninth dav women are obliged to remain within their houses from daybreak till noon, while the men parade the streets, whirling the bull-roarer, dancing, singing and beating druims and killing all stray dogs and fowls, on which tbev afterwards feast. A large boulder of granite, cailed Olumo, on the summit of a hill in Abeokuta, is sacred to Oro, and no one may ascend it.

Just as Egungun is now used for social purposes, and to preserve order in private life, so is Oro used for political purposes, to preserve order in the communitv at large; yet, from. the analogy of other peoples, and from the fact that it is death for a woman to see the instrument which produces the voice of Oro, there can be no doubt that originally Oro was the spirit that presided at the celebration of male mysteries, such as are found among the Kurnai of Australia, and he has perhaps been diverted from his proper purpose by the influence of the Ogboni.