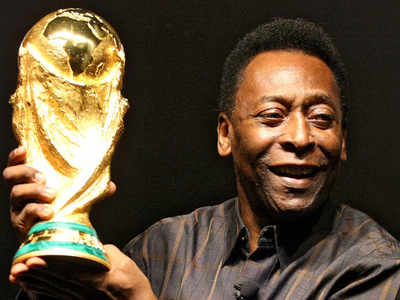 Considered by many to be the greatest footballer of all time, Edson Arantes do Nascimento, the football legend better known as “Pele,” celebrates his 80th birthday this Friday. Confined to his home in Brazil because of the pandemic, he reaches this milestone with his trademark laugh.

The football great has suffered from a series of health problems in recent years, but has not lost his charisma or sense of humor.

“I’m fine, it’s just I won’t be able to play (football),” he said jokingly in a video call with the head of the Brazilian Football Confederation earlier this week.

“Now that I am 80, I need to thank God for giving me the health to get this far, and lucidly, although not always intelligently,” he said with a laugh in a short video sent to the media to mark his 80th birthday.

“Wherever I go the world over I am well received, doors are always open to me. I hope that when I get to heaven God welcomes me the same way that everyone welcomes me today thanks to our beloved football.”

“Thank you to Brazil and all Brazilians. I was always very happy wearing this jersey. Thank you for all your warm wishes for my birthday,” he said in an Instagram post on Wednesday that was accompanied by a photo of himself celebrating one of his 1,281 goals (including those from unofficial matches).

As the only player in history to win three World Cups (1958, 1962, and 1970), Pele has chosen to celebrate his birthday quietly – as he does almost every year – pandemic or not.

But several tributes have been planned in Brazil, from an exhibit in his honor at the Sao Paulo Football Museum to a mural designed by renowned street artist Eduardo Kobra in Santos, the city where Pele started his professional career as a 15-year-old prodigy in 1955.

The museum is presenting a thematic and interactive exhibition celebrating the “King of Football.”

“Pele was the greatest athlete of the 20th century and he became a pop icon that helped build the image that the world has of Brazil,” said Gringo Cardia, curator of the exhibition that opened last week, which is aimed mainly at children and young people.

The exhibition dedicated to the “King of Football” contains photographic montages and animations, including around 500 images that display important moments in his life, from his birth in Tres Coracoes in Minas Gerais state, to his time with the Brazilian football club Santos, to his development into an international sports icon.

“He’s a living legend, we have to revere our idols while they’re still alive and still with us,” said Gabriel Oliveira, a visitor to the exhibition in Sao Paulo. “He’s done so much. Thanks to him Brazil is known the world over.”

As part of the series of tributes to Pele, urban artist Kobra has created a mural in the Port of Santos to honor the football legend.

“I was inspired by the image of Pele playing for the Brazil national team, with the sweat on his shirt forming a heart on his chest,” the artist said.

The painting includes the word “Santos”, referencing Pele’s love for the club and the city that hosted him over the course of his 18-year career in the club.

Whether captured in grainy black and white early in his career, or with his yellow and green No. 10 Brazil jersey in the era of color TV, many of those goals were spectacular displays of athletic prowess, setting the standard for the “jogo bonito” or beautiful game that would come to define Brazilian football.

To thank his supporters, Pele recorded a song with Grammy-winning Mexican duo Rodrigo and Gabriela, billed as “a little birthday present for his fans and himself.”

The new single is called “Acredita No Véio (Listen To The Old Man)”.

“I’ve written many books, I’ve scored many goals, I’ve fathered children, I’ve planted many trees. The only thing that’s lacking is a musical memento of my life,” Pele said.

His legacy looms so large that world’s football governing body FIFA named him the greatest footballer of the 20th century in 2000, alongside Argentina’s Diego Maradona, who celebrates his 60th birthday on October 30.

Pele, however, has grown increasingly frail with age. His public appearances had become rare even before the pandemic confined him at home in Brazil, where COVID-19 has now claimed over 155,000 lives, the second-highest death toll in the world after the United States.

He has had longstanding kidney and hip problems and earlier this year, his son Edinho revealed his father had become depressed and reclusive due to his failing health.

“Just imagine, he’s the ‘King’, he was always such an imposing figure, and now he can’t walk normally,” the son said.