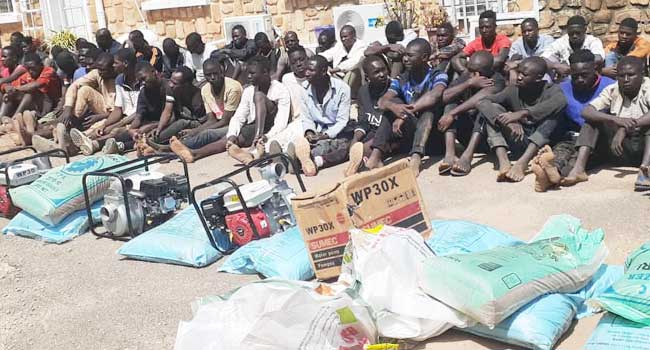 Security operatives have arrested Over 100 suspects in Plateau for allegedly invading warehouse in the State Agricultural Development Programme (PADP).

This was disclosed by the Commander of Operation Safe Haven, Major General Chukwuemeka Okonkwo on Sunday in Jos, the state capital.

He said security operatives cannot watch what he describes as misguided elements and hoodlums destroying government and private properties.

Okonkwo noted that security personal swung into action to arrest the suspects to serve as a deterrent to others.

The suspects were arrested at Dogon Dutse around Angwan Rukuba and west of mines as well as Dogon large at Custom warehouse.

Those arrested include 105 male and 13 female, and the Commander assured that all of them would be prosecuted.

Some stolen items recovered from the suspects include fertilisers, pumping machines, agrochemicals, generators, trailer Tube and other farming items that are not foodstuffs.

He also warned those involved in such criminal acts to desist from or risk facing the full wrath of the law, adding that security personnel have been deployed to the fields to ensure law and order is restored in the state.