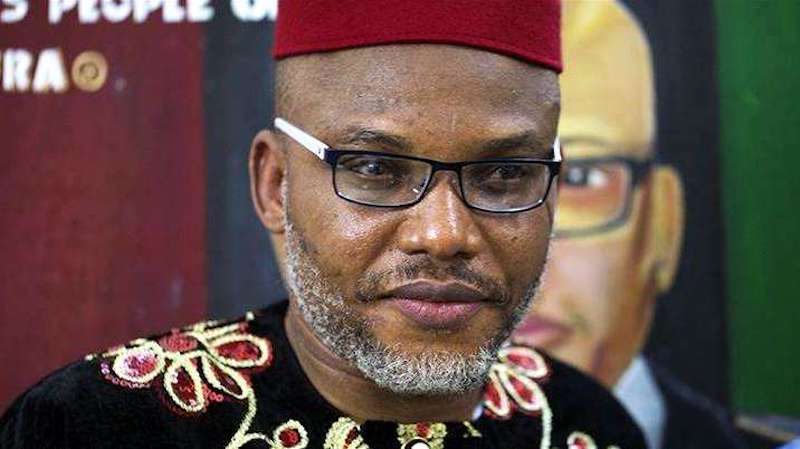 The Leader of the Indigenous People of Biafra (IPOB), Nnamdi Kanu has debunked the story that he ordered the destruction of economic assets of Yoruba people in Lagos State, Says enemies of Igbo, Yoruba unity spreading falsehood.

He disclosed on Thursday afternoon, in an emergency Zoom broadcast on the topic: “#EndSARS is not an ethnic protest, stop the propaganda to make it one”, organised by Njenje Media TV on the ethnicization of the #ENDSARS movement.

Kanu said that agents of the Federal Government carefully twisted parts of his recent broadcast to create impression that he had turned the EndSARS protests against Yoruba.

The broadcast which also featured former Minister of Aviation, Femi Fani-Kayode. was moderated by Mazi Ezeoke.

Kanu stated that those who caused division between Chief Obafemi Awolowo and Dr. Nnamdi Azikiwe during their time were bent on pitching Ndigbo and Yoruba against themselves.

He was emphatic that Britain was trying to divide Southern again for the North to conquer but that they had failed.

The IPOB Leader urged the people to ignore any divisive statements regarding Yoruba or any other ethnic group in Nigeria, credited to him, urging that to really situate what he said, one must listen to the about 2 hour broadcast.

He said: “I made a broadcast a few days ago when young people were being slaughtered at Lekki Tollgate. In that very speech, I was very clear and unambiguous but the people who cut and paste and put the clips together were trying to be very mischievous. Their intension was to infuse an element of tribalism or ethnicity in the ongoing campaign of young people to free themselves from the bondage they have found themselves in Nigeria. And that intension I believe, failed woefully. At no time did I insinuate or say anything conveying the erroneous impression that they are now peddling that we were going to take over or control Lagos State…

“My stand is that I support our young people, I support the protesters, I also support the right of people to express their views without being distorted. As I said before, they cut out what I said and then quoted me out of context. If you want to know what I said, and the context I made the statements, you have to listen to the whole perspective”.