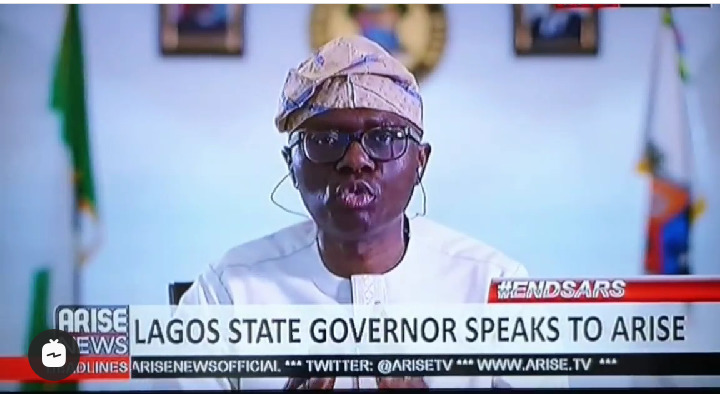 The Governor said this on Thursday while responding to questions during AriseTv programme ‘ The morning show’ on what he meant ‘forces beyond our direct control’ in his state address on Wednesday.

He said, “I don’t understand the protocols of the military; how they come out or what is their line or chain of duty but eventually they said to me they would come out and we’ve seen a quite number of them responding to a lot of those facilities but we could say after this effect, these buildings have been touched.”

When asked to explain why CCTV at Lekki Toll Gate was removed before the dastardly act, he said:

“The cameras removed were not security cameras, it is a laser camera for cars; it picks tags for cars and plate numbers; it is not a security camera; it is an infrared camera; security cameras are still available and that is what we are using for our own investigation.

“They did the removal because of curfew. As regards the light LCC put off the light because of the curfew order issued by Lagos State Government. I have never spoken to the owner of the company  (Tinubu’s son), I am very certain their decision was purely a corporate decision.

“I will not stop to continue to apologize to Lagosians.

Is it possible to make CCTV footage public; Sanwo-Olu agreed to make it public.

When asked if he has spoken to President Muhammadu Buhari on the incident on Wednesday, he said:

“He (Buhari) was actually the one that asked the Chief of Defence Staff to call me and I think it was when he got my message because when the Chief of Defence Staff called me, he said to me, it was the President that asked him to call…so I have not spoken to him directly so maybe sometime later today that might happen. I don’t have a report to say this was what he said or anything because we haven’t spoken,” Sanwo-Olu.