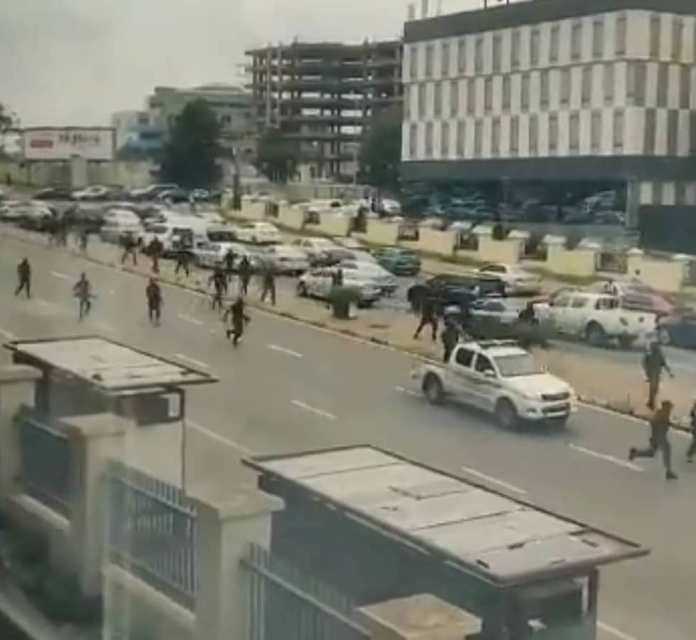 The Nigeria Police Force in Abuja on Friday dispersed protesters who took to the street to demand a disbandment of Police operatives of the Special Anti-Robbery Squad (SARS).

The #ENDSARS protesters are demanding an end to brutality and extra-judicial killings by FSARS.

According some videos circulating in the social media, policemen fired gun shots and tear gas in the air to disperse the protesters who marched on the streets in the Central Area of Abuja. This created pandemonium that led the protesters and residents to scamper for safety.

At press time, no fatality has been recorded so far.

In Lagos, the protests also took place where the protesters sieged the State House of Assembly, demanding to speak with Governor Babajide Sanwo-Olu.

They were joined by music artistes and celebrities including Folarin Falana popularly known as Falz; and pop star, Runtown; Tiwa Savage, Paul of Psquare, Jaywon, Dremo, This is Wurld and popular Dj Spinall.

In Benin City, the capital of Edo State, youths from various groups including Coalition of Youth Groups, Civil Society Of Nigeria, and National Association of Nigerian Students (NANS) marched in a peaceful protest and called for an end to harassment by members of the Special Anti-Robbery Squad.

The youths converged on Ring Road, marched to the Nigeria Union of Journalists (NUJ) secretariat in the state, and later moved to the Edo State Police Command Headquarters to express their agitations.

In Ughelli Delta State, the protest turned bloody as a police officer was killed during a clash between Police operatives and the youths of the community.

The youth said they were protesting against intimidation, harassment and extortion by operatives of the Special Anti-Robbery Squad (SARS) and other police officers in the area.

In Osogbo, the protest caused gridlock at the Ola-Iya junction.

It was learnt that the protesters pelted stones at the security operatives in a bid to resist any attempt to stop the protest.

The security operatives, who initially took cover beside their Armoured Personnel Carriers stationed at the junction, later shot indiscriminately to disperse the angry youths.