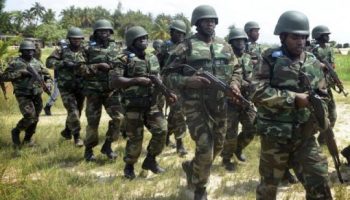 The Nigerian Military says 312 bandits have been killed while 91 kidnapped victims have been rescued in the northwestern part of the country between July and September 2020.

The Coordinator, Defence Media Operations, Major General John Enenche disclosed this while addressing a news conference in Abuja explained that scores of terrorists have been neutralized and their camps destroyed through the ground, maritime and air operations.

Giving a breakdown of military operations within the last three months, General Enenche said that 9,040,300 litres of stolen AGO and 33, 500.00 litres of DPK were recovered during various clearance operations by troops.

He urged members of the general public to continue to support the military by providing credible intelligence to troops operating within their localities.