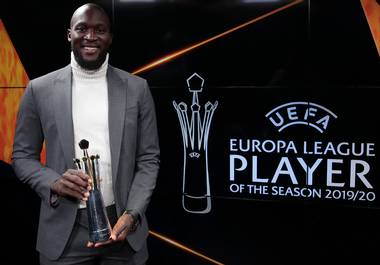 The 27-year-old finished ahead of Bruno Fernandes and Éver Banega to win the fourth edition of the award, which was announced during the UEFA Europa League group stage draw in Nyon. His Belgian international team-mate Eden Hazard collected the gong last season.

Lukaku registered in all six of Inter’s games after entering the competition in the knockout stage – striking seven goals in total – and also laid on two assists. He opened the scoring from the penalty spot in August’s final though he was unfortunate to later deflect in a shot that gave Sevilla the title.

Lukaku nevertheless ended 2019/20 with 34 goals in all competitions for the Nerazzurri, a significant figure as it was also Ronaldo’s return in his first campaign at the club in 1997/98. Having found the net in Inter’s last two UEFA Champions League matches before transferring to the UEFA Europa League, he scored in eight successive outings in UEFA competition.